Our group (SMB Mountaineers) chose Calaguas Islands for our annual summer outing. Calaguas is a group of islands located in Camarines Norte. Tinaga and Guintinua are two of the more popular major islands comprising Calaguas while Maculabo is one of the minor islands. Almost all the islands of Calaguas fall under the jurisdiction of Vinzons, Camarines Norte except Maculabo which falls under the municipality of Paracale.

Our group (chillax superlines) was scheduled to leave 7:45PM of the same day. We met at the bus terminal at Cubao. There were a few who backed out from the original list but there were also last minute addition like the friends of Mam Riz, LJ and Maris and Mai who’s a cousin of Mam Gabby.

Approaching 8PM and almost everyone was accounted for except for sir AC, who probably got lost, hehe. We then just proceeded to pick him up from where he’s at and at 8:15 everyone’s on board.Yes, Finally! I’ve been dying to visit this place but maybe it was meant for this time so I could be with my SMberks. I could really feel the excitement and so was everybody else. Everyone’s updating their FB status, thanks to the free wifi provided by the bus.

And off we go….. Once in a while I’m waken from my sleep because of the numbness from my buttocks. I didn’t know where we were but I felt that zigzag road and the dizziness it brought further put me to sleep. It was still dark when we reached Paracale and Mam Do texted Sir Jim and informed him we have arrived. We were earlier than they expected and the market and eateries were still closed so we had to stay at the gas station til 6:30AM. The John Strada group went to the market while we had to look for breakfast. It would still take 2hours of boat ride before we could reach the island of MAHABANG BUHANGIN so we had to make sure we had something in our stomach. We chose a carinderia that serves Tapsilog and the owner got rattled as were more than 20 people. I had a plate of pancit and a glass of water and I was full…Then the unexpected happened…. I accidentally broke not one, not two….but a dozen of glasses. Everyone was shocked—- then there were burst of laughter… Good that the owner was kind hearted and I didn’t get to wash the dishes. But of course I had to pay Php150 for those broken glasses.

It was Sir Jayson’s birthday but we couldn’t get him a birthday card. Mam Riz, She and I  managed to get a party hat though and I guess that should suffice.

We then took a walk towards Paracale fish port where the boat was waiting. At the port I was surprised to see lots of large fishing vessels. I grew up along the shoreline but I didn’t see much of these big boats. 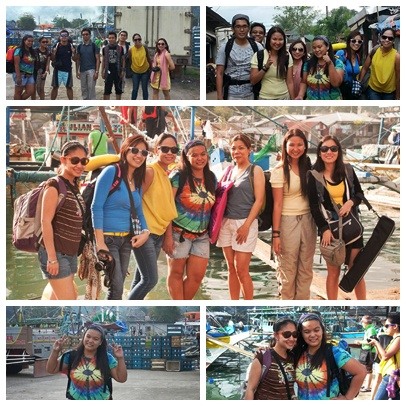 Getting ready to go on a boat ride to Mahabang Buhangin 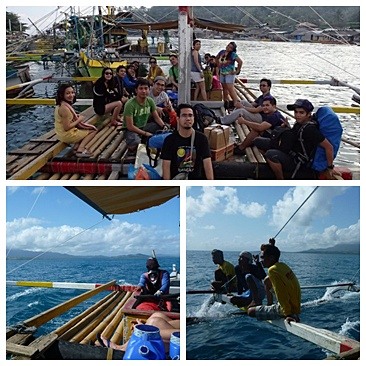 SMBerks with the pilot and his 3 helpers 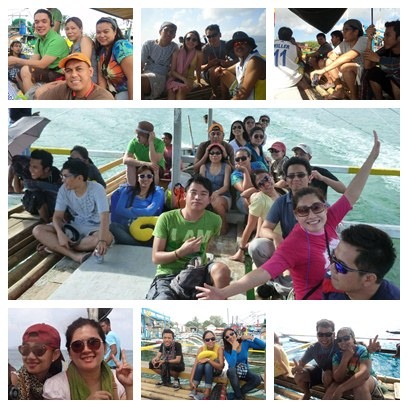 Everyone posing for the camera

As I embarked, I felt some shivers on my spine as I thought of those glasses I broke…coz’ there’s a superstition or an old saying that something would happen if you broke a glass. 10 minutes of sailing when I felt those big waves. I could see those small boats running alongside almost getting devoured by those waves and I thought we’re gonna be on this boat for 2 hours so I needed to stay calm and stand my ground. I just consoled myself thinking we had a pretty big boat that could weather the storm and of course I prayed…..  A few more minutes and I was getting used to the waves.

To overcome my fears I went in front of the boat. I wanted to spread my arms like what Rose did in TITANIC then I realized I didn’t have any  Jack who would stand by me, so I just sat down along with Mam Gabby, Sir Reign,Sir Welch, Sir Jm and Mam Lanie. And I finally got over it. 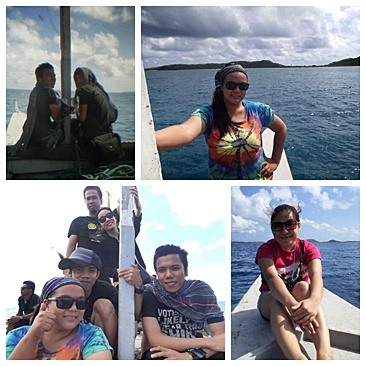 Past the hour of sailing when we passed by these islands. Such an enchanting sight… each island uniquely beautiful than the other. If only we had the time to visit each one. 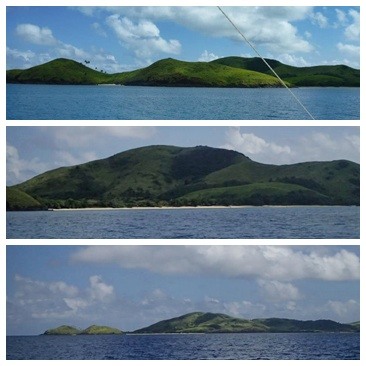 Breathtaking view from our banca

Then finally we docked at Mahabang Buhangin. I cant put to words and describe what I’m seeing. I feel like I got lost in paradise! Those velvety sand and blue waters – Wow!! Perfect!!! 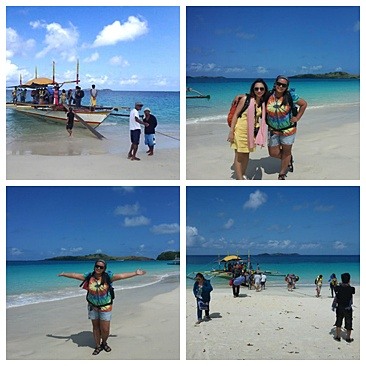 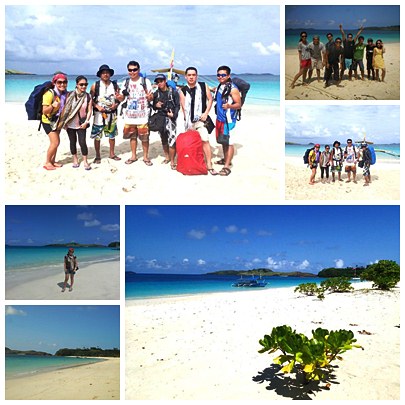 As soon as we settled, we immediately, pitched our tent. I was hoping to get some rest and enjoy that magical scenery but I just couldn’t wait to take that dip. I rushed to join mam gabby and her cousin in the water while everybody was getting some rest. It was high noon and we were under the heat of the sun – but we couldn’t resist those crystal clear waters, you could see everything underneath. We swam and swam and enjoyed those clear waters until lunch time was ready. 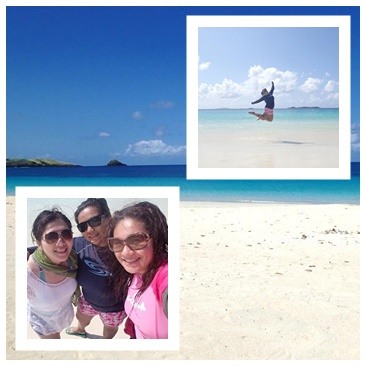 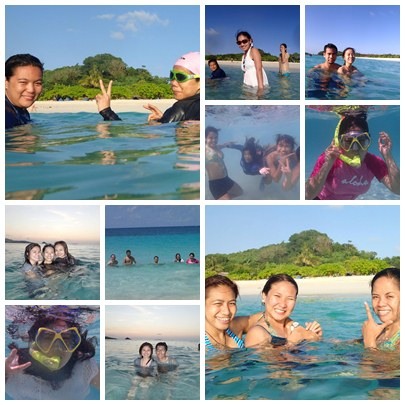 Smberks and the crystal-clear water of Calaguas 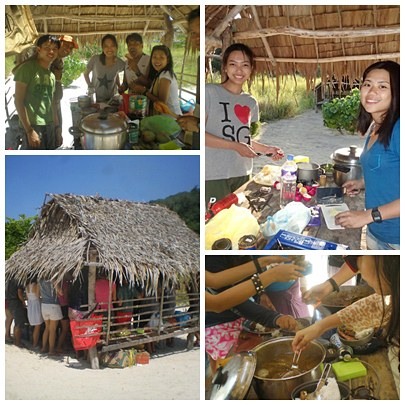 Lunch time – thanks guys for preparing our lunch!

After lunch, we strolled the shoreline of Mahabang Buhangin. At the end of it were gigantic rocks whose shape & structure were carved by the endless splash of wave. But of course, we needed to capture these on camera, so, walang sawang picture taking. 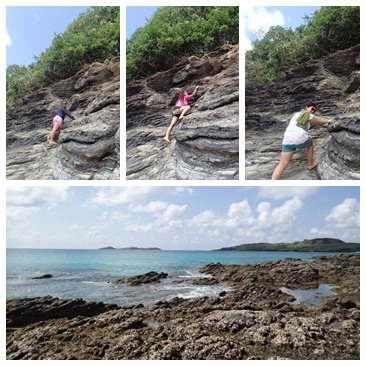 Finally got tired so we hung out at the cottage. Kwentuhan & kulitan with SMberks. At times I couldn’t relate with what the IT people were talking but what the heck – everybody’s having fun. After much of those endless and at times senseless talk, we were again headed for the beach. This time, all of us were there. The amazing race prepared by sir Jim didn’t push through but we managed to have different games. We decided to bury the boys into the sand! Thought it was an easy game but really it’s easier said than done – more so if you’re racing against time. Mam Riz also introduced that game “ catch the dragon tail.” We looked like we were back at grade school and everybody played their hearts out, not a single one wanting to lose. But of course somebody had to, and sadly, but enjoyingly sad – it was our group that lost. As to why or who carries that bad luck, well it didn’t really matter coz everybody had a really great time. The next game was charades and we won that one. Credit to sir Billy for his great antics and his PUSONG BATO hahaha 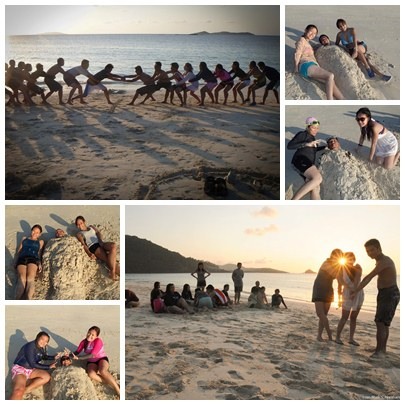 It was already sunset when we had enough of the sea. There was no fresh water on the island but there was a pump where we could rinse ourselves. After that, dinner was ready – thanks to Mam Dotie, Mam Joanne, Sir Jim, sir MikeA and Sir MB who took time to prepare the food…well, after dinner what could possibly be next but drinking time. All those intoxicating drinks ( GSM, Kwatro Kantos, The Bar, Matador, etc. ) – you name it – we drank it!!! And wait, did I mention that the birthday boy (Sir Jayson) turned into an emotional cry baby? Why? Because of all the messages & greetings that came from everyone…( almost cried lng pala nagpigil pa! konting effort pa daw haha sa next bday na lng ulet 😛 ) 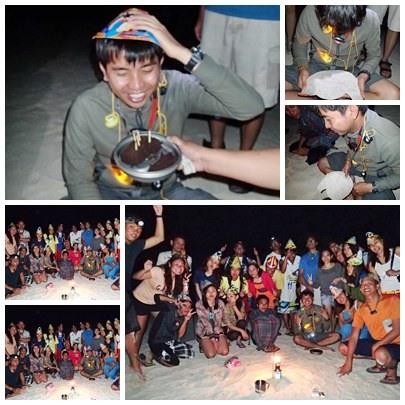 Happy birthday Sir Jayson J Thanks for celebrating your birthday with us!

And as the drinking spree went on, the alcohol got into everyone’s nerves, and everybody felt like conios and started speaking in English maybe those drinks will make a good English teacher…hahahaha

At last we finish our drinking before it could finish us! Mam riz, Ms Gabby and myself dumped our 3 sexy bodies into one sleeping bag by the beach. We were all staring at the stars when we felt that drizzle. The drizzle turned into rain so we had to scamper for safety. Luckily, sir Billy felt like sleeping outside hahaha so we took his tent and gave it to Mam Gabby while Riz and I shared the same tent. A few more seconds and I was snoring. Zzzzzzzz….

It’s morning and everyone else was busy. We were about to leave this beautiful island. After breakfast, it was time for last minute preparation and this was it! Time to bid Calaguas Goodbye. A few more pictures here and there and we were headed for the boat back to Paracale fish port. Another 2 hours! I couldn’t resist screaming as I felt the splash of waves but just a few more minutes and I got used to it. Just like what I felt on our way to this island we were now leaving. The waves got bigger, it was getting dark and there was slight rainfall. Two hours after and we were safely docked at paracale fish port. Smiles written in everyone’s face – carrying with them sweet memories of this beautiful island called CALAGUAS. 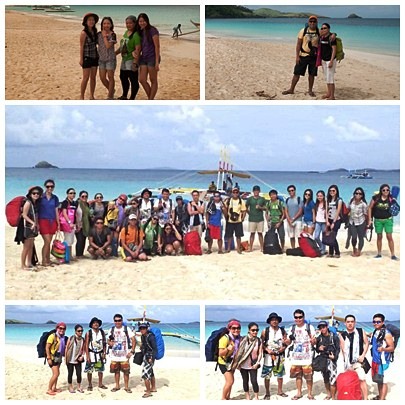 Goodbye Calaguas until we meet again!

We arrived at Paracale at 11:45am and ate lunch.There was only one trip scheduled for Manila and it was at 7pm. We all have work the next day so we should get going ASAP. Luckily Mam Dorothy has a contact as Superlines – and after lots of phone calls, using her persistence and charm, we got ourselves an earlier schedule. The bus picked us up at Our Lady of Candelaria Church in Paracale. At 2:00 pm we were all on board except for Mam Joanne and Mam Monica whose chose to book a flight. We stretched our back and rested on our seats and tried to get some sleep. We needed that energy for work the next day. Back to reality! 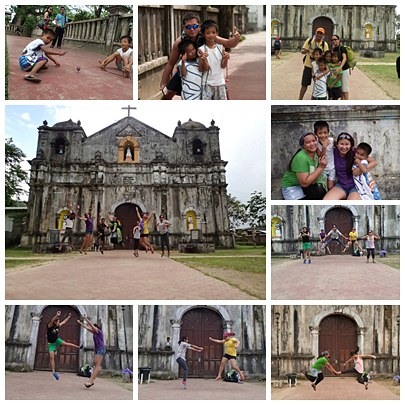 Our Lady of Candelaria Church, Paracale (while waiting for the bus to arrive)

To our organizer Mam Do and co-organizers for your untiring efforts to make this event possible. Until next time.Mwuaah mwuaaah tsup tsup!

To all Smberks who joined and will join us again next time.

To the cooks for preparing the food – You guys are the best!!

To the guests who joined and will join us next time – you’re greatly welcome.

And to each and everyone who took time and effort to join us in exploring this beautiful island CALAGUAS – as the Bicolano saying goes.